↓ Skip to Main Content
Home › About us › The Planetarium

In stellar hall of the planetarium there are 45 seats. Its diameter is 8 metres. The first planetarium in Bulgaria is made by Milko Milanov in Dimitrovgrad. The apparatus uses 47 projectors for film strips. It showed night sky in north hemisphare and also the place of the Sun and Moon with its phases. In thos time from 1962 to 1972 with this apparatus were demonstrated the lectures in stellar hall.

From 1972 is used new planetarium “Karl- Zeis”. It shows around 5000 stars of the 6 magnitude. It shows also Sun, Moon, planets and twenty-four-hour period. Other projectors are delivered later. 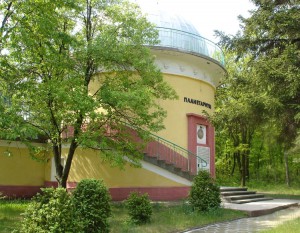 They show solar system, two comets, meteor shower, vario- projectors of planets- Earth, Mars, Jupiter, Saturn, which add the picture of night sky. For the lectures of the planetarium we use other pictures with media projector.